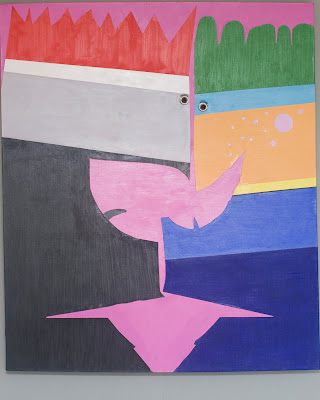 I wandered into Hollingsworth Gallery the other day. You should, too.

You may be lucky enough to meet an unassuming, mostly bald guy who will introduce himself as Bill. He won’t tell you the William Brant Gallery at the Massachusetts College of Art and Design is named after him. He probably won’t mention he was an art professor for 40 years, or that now he is a mentor to young painters in Palm Coast.

Brant’s work is on display through Tuesday, Nov. 2, at the latest exhibit at Hollingsworth Gallery, located at City Marketplace.

He calls himself a colorist, coming from the tradition of Van Gogh, Gauguin and Matisse.

“There are two kinds of colors in painting,” he says. “If you paint the grass green and the trees brown and green and the house the color it’s supposed to be, it’s called local color. In normal, realistic painting, that’s what’s used. There’s another kind of color called subjective color. It comes out of your head or out of your heart.”

Brant and I sat on folding chairs in front of his artwork on the back wall of the gallery, and we were soon joined by Hollingsworth owner and curator J.J. Graham. He’s a young man with a mop of brown hair and the body language of a surfer dude.

“Color is a stimulant — one of the few that won’t rot your teeth or land you jail,” Graham says.

Pointing to “In Your Face,” Brant says first of all he hopes it’s something pleasing to look at. Second, it’s a political commentary.

“Social discourse today has lost its civility,” Brant says. “From road rage to abortion to black to white, to religious issues — there is no longer a polite, civil discourse to these things. There is a position I have and a position you have, and we’re not talking to each other, but at each other. It’s a confrontation, not a conversation.”

And the form — the way the components of the painting are executed — is meant to convey that message. The pink space may represent the tumultuous airwaves between the two arguing faces.

Brant picked bright, bold, simple colors because they’re childlike on one hand, but also because “this painting is all about contrast,” he says. “It’s one raw color coming right against the next one.”

Brant used oil paints on canvas, but he didn’t just use a brush — he also used tape to keep the edges of the shapes as sharp as possible. Again, that emphasizes the contrast.

Graham says painting is a form of alchemy. It’s just paint and canvas, but there is a unique, intangible element created in the hands of the artist with each new artwork.

“Being fortunate enough to live around it, I can see that art has an effect on my mood,” Graham says. “It elevates me, helps me to think. … Sit there, and then let me take all that work out of here, and see how empty it feels. You see? The art is giving you something. It can hold a room together.”

As I left the gallery, I couldn’t help thinking Graham and Brant are engaged in something significant — maybe more significant than the work going at the Palm Coast city offices. I’m not discounting the hard work of all the employees who help build this city, but the serious artists next door are also building the city in a different way. They’re reminding us that truth and beauty are still relevant and cool, still worthy of meditation in a busy world.

Note: This column was first published in The Palm Coast Observer.